Enjoy an evening of romance and laughter with the "First Couple of Comedy" at the Lucy Desi Center for Comedy on Saturday, February 16. First enjoy a cocktail hour in the Desilu Studios where you can mingle among original costumes, props, Emmy Awards, and exact replicas of the I Love Lucy studio sets. Then enjoy a candle-light dinner in the Tropicana Room where you can enjoy delicious Caribbean Chicken & Rice or Italian Style Veggie Lasagna.
Next have some laughs with your loved one with stand-up comedian Nick Siracuse. Writing for Jay Leno, The Arsenio Hall Show, and The David Brenner Show, Nick will have your laughing for days. Finish the evening off watching the I Love Lucy episode "The Marriage License" where Lucy and Ricky re-create the day that Ricky proposed.
Purchase your tickets now online or by calling 716.484.0800. Beer and wine served throughout the evening by cash donation.
post at 10:44 AM 1 comment: 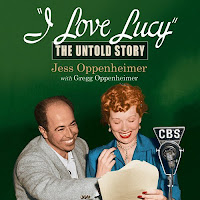 In this interview outtake from PBS's Funny Ladies series, Carol Burnett describes meeting Lucille Ball for the first time and Ball’s generous offer to be of help during Burnett’s budding career. The two would become close friends and perform on each other’s shows. Burnett also shares her favorite anecdote about Lucy.

Watch The Friendship of Carol Burnett and Lucille Ball on PBS. See more from pbs.

Lucille Ball and Desi Arnaz were beloved the world over for their iconic sitcom, “I Love Lucy,” but the 1950s Hollywood power couple tried to shield their young children from the limelight.

“It’s interesting. They said, ‘We wanna make it, we don’t wanna ever put our kids in the show. That would be too horrible,’” Lucie Arnaz, the couple’s first child, said in a recent interview with ABC News. “They did that on purpose. I mean, and I think that’s great.”

For “Lucy” fans, that’s what may make clips like the one above all the more treasured. The 1954 newsreel (shown below) shows Arnaz and Ball introducing their two children, then just toddlers, before launching into a plea urging viewers to contribute to a campaign by the March of Dimes to raise money for the testing of a polio vaccine.

Later on in the newsreel Ball speaks of living in fear that her own children might someday contract polio, adopting a serious tone that marked a stark contrast to that of her clownish TV alter ego. (After the successful development of the polio vaccine, the March of Dimes, which celebrates its 75th anniversary next year, moved on to fund other advances in maternal and infant health. A major focus of the organization today is preventing premature birth.)

There was some overlap between fact and fiction when it came to Ball and Arnaz’s family. The “I Love Lucy” episode when Lucy gives birth to Little Ricky — later played by young drumming prodigy Keith Thibodeaux – aired on the same day that Lucille Ball had a Caesarian section to deliver Desi Arnaz Jr. It was all on purpose, Arnaz Jr. says.

“They shot the show four months earlier. And decided it was going to be a boy on television. But they knew that they could kind of plan when I was gonna be born, because the doctor said, ‘Well, we could do it the same day,’” he said. Though Lucie Arnaz and Desi Arnaz Jr. didn’t appear on “I Love Lucy,” their parents often did bring them to the set.

“It was like growing up behind the scenes at Disneyland,” Arnaz Jr. remembered. “You got to see how all the magic was put together — the smoke and mirrors.” Arnaz Jr. even palled around with Thibodeaux, a.k.a. Little Ricky; the two children bonded over their mutual love of playing the drums.

“It was amazing. I became best friends with the kid who played me,” Arnaz Jr. Both Arnaz children grew up to be performers. Lucie Arnaz, 61, is a singer and actress with a long career spanning both the stage and screen. Desi Arnaz Jr., 59, portrayed his father in the 1992 film “The Mambo Kings,” played with his own band and now runs a ballet company with his wife.
post at 7:00 AM No comments: