RALEIGH, NORTH CAROLINA (Reuters) - Although, technically speaking, Lucille Ball, Desi Arnaz, Vivian Vance and William Frawley never left small screens thanks to 60 years of "I Love Lucy," in TV reruns, the gang is back for their first interactive adventure in "Retro World."

"I Love Lucy," from maker Entertainment Games, enters the videogame space in early March as an episodic series available on Facebook and RetroWorld.com with mobile and tablet versions to follow.

The black-and-white game will blend footage from one of the most popular TV comedies of all time with new character interaction, exploration, puzzles and mini-games.

The first installment expands on the classic "Job Switching" episode in which the girls, Lucy Ricardo (Ball) and Ethel Mertz (Vance), go to work while their husbands Ricky (Ricardo) and Fred (Frawley) stay home and take care of the house. In the game, the players control Lucy and Ricky.

"The experience is uniquely designed to feel like you're playing in an actual 'I Love Lucy' episode," said Gene Mauro, President of Entertainment Games.

"In some scenes, players will control Lucy as she struggles comically to stay employed alongside Ethel in the chocolate factory; in other scenes, players become Ricky as he coaches Fred and labors to learn the ropes of basic housekeeping." 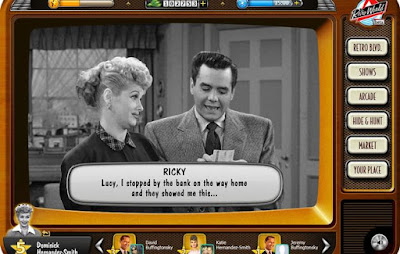 Entertainment Games has worked closely with producers Desilu, Too, LLC and CBS Consumer Products Inc., which control rights to products from the classic TV show that first aired from 1951 - 1957, on the game, turning the program's comedy into casual games designed to appeal to the boomer generation.

Since launching its initial game in November 2011, the company has attracted over 60,000 players to its games like the '60s era spy game "Owl Files" and the '60s era comedy "Kat the Brat." Mauro said "Retro World" gamers are currently attracting mostly women with over 50 percent in the 40-plus age group.

The game makers have been using Facebook to test core gameplay in preparation for the "I Love Lucy" launch, which will mark the initial marketing push for the casual gaming company.

"They have an original idea, and think that iconic branded entertainment will have a lot of appeal, especially among the older Facebook users who remember brands like 'I Love Lucy,'" said Michael Pachter, videogame analyst, Wedbush Morgan Securities. "The unique nature of Entertainment Games' focus on nostalgia could build them a sizeable audience."

New "I Love Lucy" game episodes will be released every few months. Once they finish the first episode, players gain access to a Lucille Ball avatar that they can use to explore the rest of the game world. Ball joins fellow Hollywood icons like Dick Clark, Marilyn Monroe, Elvis Presley and John Belushi who already have avatars in the virtual game world.

Mauro said that from "Retro World's" initial inception, the company envisioned working with media companies to bring iconic forms of entertainment already ingrained in people's memories to life through this game platform.

Unlike Zynga, which has 227 million monthly active users across all age groups playing its casual games like "CityVille" and "Hidden Chronicles," Entertainment Games is focusing on the 150 million members of the baby boomer generation who are active on Facebook.

Entertainment Games plans to launch an additional four game franchises this year based on classic CBS TV shows from the '50s, '60s, '70s and '80s. Pachter believes that if Entertainment Games can get other big retro licenses like CBS' "The Brady Bunch" it can build a pretty interesting business.

For now, "I Love Lucy" fans will have more than just re-runs on Netflix or TVLand to enjoy.

Another Lucille Ball Special, Lucy Moves to NBC, will be released on March 20, 2012.

This special first aired on February 8, 1980.  This NBC Musical Comedy features Lucille Ball playing herself, retired but talked back into show business by NBC president Fred Silverman (satirically played by Gary Imhoff). Congratulations are proffered in guest spots by Bob Hope, Johnny Carson, Gene Kelly, Jack Klugman and Gary Coleman, cast as a network programming VIP. Lucy's hired to do is create a new series with the help of her production assistant Gale Gordon. They come up with is a variety show a la 'The Partridge Family,' headlined by Donald O'Connor and Gloria DeHaven. But what evolves is a spoof of TV decision-making as well as long-and-dance numbers highlighted by O'Connor's medley from the movies, an O'Connor-Ball duet set to 'A Real Live Girl' and a rousing banjo solo performed by Scott Plummer."

Be sure to Order your copy today of Lucille Ball Specials: Lucy Moves to NBC

This was the last Lucille Ball Special she starred in until her fateful last series, Life With Lucy in 1986.  Her last movie, Stone Pillow, aired in 1985.
post at 7:00 AM No comments:

Lucille Ball got her real life children to co-star with her in CBS' Here's Lucy, which premiered on September 23, 1968. As Lucille Carter, she was mom to her real life son, Desi Arnaz, Jr., who played Craig and her daughter Lucie Arnaz, who played Kim. Lucy found it a wonderful way to work and have a personal relationship with her children.

Almost every episode had a different celebrity guest-star, usually playing themselves. To accommodate the frequent guests, the new format has Lucy Carter working for the Unique Employment Agency run by her Uncle Harry, played by Gale Gordon. Mary Jane Croft returns as Lucy's friend Mary Jane, and Vivian Vance continued to make her yearly appearances.

There is only one more season of Here's Lucy for MPI to release.  No scheduled date for it's release has been announced yet.

Be sure to get your copy of Here's Lucy, available for pre-order here!
post at 7:00 AM No comments:

Some things change but one thing is for sure - nothing good comes out of Missouri when it's a snotty "teacher wanna-be" blonde.  I guess some people feel threatened if they don't come up often enough on the internet.  But that takes knowing a thing or two about SEM.  Well in doing a little research, I can understand why they feel threatened and will go out of their way to threaten others and do more time in running around in fear instead of producing.

One thing about Lucy - she was open to change and open to sharing information and willing to change and adapt.  She accepted everyone and that included the gay and lesbian community.  She wouldn't fall for today's conservatives and was a proud red-headed liberal that stood up for her convictions.  This is fact and nothing Ms. Missouri can do will ever change that.  She stood up to the "Red Scare" and fear from conservatives and she won.

First Couple of Comedy
Lucy took on a man's world and changed it for herself. It was Lucy who was in charge at Desilu, not her husband, Desi Arnaz. While reviewing the Broadway hit, Too Many Girls, back in New York for RKO, which had the movie rights, Lucy first layed her eyes on a bright new Cuban star, Desi Arnaz. She was mesmerized by his appearance. While producing films for Columbia Pictures, CBS offered Lucy a Radio show based upon the book, Mr. and Mrs. Cugat by Isabelle Scott Rorick. Lucy was interested, especially if Desi could costar, but the big brass at CBS thought he was not the type to play a typical American husband. CBS turned a deaf ear to her proposal and she was teamed with Richard Denning in My Favorite Husband.

With the success of My Favorite Husband, CBS began talking about taking the show to television. Lucy saw the possibility of a television series as an opportunity to not only take her radio success to another level, but as an ideal way to mesh career and marriage into one by working with Desi on the same show.

Lucy refused to do the show without Desi, which was a major stumbling block for CBS. In order to get CBS to agree and as a way to promote themselves Lucy and Desi formed a partnership, launching Desilu Productions in the Spring of 1950. They took their vaudeville act on the road, which eventually became the Pilot for the I Love Lucy show featuring Pepito Perez, the renowned Spanish clown.

NBC became interested in the two and thought they made an attractive package, with Lucille's film and radio career and Ricky's nightclub and recording contract with RCA. CBS had no other offer except to accept the two and abruptly okayed the television sitcom that Lucy wanted with Desi portraying her husband.

With that, one of the greatest sitcoms of all time had been formed.

The Spark Continues On
She remained the top comedian for more then the next 3 decades on television. Even today, Lucille Ball remains America's most popular TV comedienne, known for her henna red hair and slapstick comedy routines.

She starred in five different TV shows during her career; the original, I Love Lucy (1951-57), became one of the great TV landmarks of the 1950s and continues today on TV across the world. The Lucille Ball-Desi Arnaz Show, known in reruns as The Lucy-Desi Comedy Hour (1957-60) followed the I Love Lucy format in an hour-long show. After Lucy's divorce from Desi Arnaz, she went on with her friend, Vivian Vance to The Lucy Show (1962-68). Afterwards, she contined with her children in Here's Lucy (1968-1974). Although it seemed she would retire from TV Comedy series, she came back briefly in 1986 with Life With Lucy.

Lucy may be gone now, but she will continue to be with us as long as we have Television!

------------------------------
So there you have it - one woman who is head and shoulders over a "blonde".  And unlike others, please feel free to copy and share and distribute anything and everything.  It is nothing more then flattery as well as keeping the information flowing freely for all to enjoy, which is the true nature of the internet!