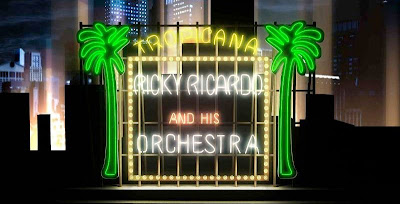 Treat your Valentine to a cocktail hour, a lovely dinner and a romantic movie, all for just $99 per couple at the Lucy Desi Center for Comedy.

Saturday, February 11, the Center is offering a complete evening, starting with a cocktail hour of beer and wine in the Desilu Playhouse attraction (includes two glasses/person followed by cash bar). Enjoy the Playhouse with its replicas of the "I Love Lucy" television sets, original costumes and more..

Then it's upstairs to the Tropicana Room nightclub with your choice of pineapple chicken, thyme roasted filet medallions or a grilled vegetable stack for dinner, accompanied by romantic music. A printed photo of each couple is included in the price of the evening.

After dinner, the party moves to the Lucy Desi Museum for a private showing of the movie, "Too Many Girls," starring Desi Arnaz and Lucille Ball. It was on the set of "Too Many Girls" that Lucy and Desi first met.

The Lucille Ball-Desi Arnaz Center for Comedy is located at 2 West Third Street in Jamestown, NY.
post at 7:33 AM No comments:

This winter, the Portland Museum of Art will showcase its growing collection of celebrity portraits, highlighting two newly acquired portfolios of works by artists Berenice Abbott and Robert Doisneau.

It also includes a selection of paintings, drawings and sculptures by leading European modernists such as Pablo Picasso, Fernand Leger and Jean Arp, along with their photographic portraits.

The exhibit, on view Jan. 14 to April 8, reveals the sometimes surprising ways in which appearance, poses and props help define the public's perception of an artist’s work — both on the stage and in the museum.

Other photographers whose works will be on view include Philippe Halsman, with his ground-breaking images of notable early television comics such as Lucille Ball, Jimmy Durante and Imogene Coca, whose wildly expressive faces helped forge their careers.

The exhibition also includes a close look at some of America’s most recognizable artistic personalities — Andy Warhol, Andrew Wyeth and Robert Indiana — masters of public relations, as well as the canvas.

The third-floor Konkel Gallery will be devoted to Maine photographer David Etnier’s extensive portrait project, which focuses on the work of his father, Stephen Etnier, and their artist friends who have dominated the Maine art scene for the past 30 years.

On display will be portraits of some of Maine’s favorite artists, including Dozier Bell, Alan Bray, Brett Bigbee, Jack Heliker and Karl Schrag. Each photograph will be juxtaposed with a work of art drawn from the museum’s permanent holdings. Collectively, these works highlight the story of Maine art over the past 50 years.
post at 7:00 AM No comments: 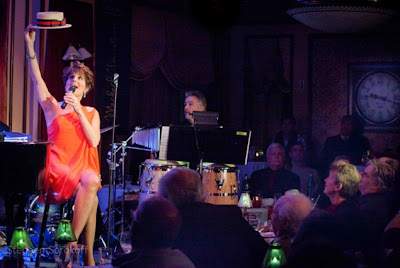 The Lucille Ball-Desi Arnaz Center is pushing ahead with its plans to establish Jamestown as America's capital of comedy.

The Jamestown Post-Journal reports that the center's plans for 2012 are highlighted by a bigger, better Lucy Fest next summer.

The Lucille Ball-Desi Arnaz Center returned to the center stage with Lucy Fest this past summer, breezing through the first of its four strategic objectives.

Next year, the center is pushing for an even bigger festival and a closer realization of the ultimate goal - recognizing Jamestown as the capital of comedy.

"In 2011, I would say we accomplished what we needed to," said Executive Director Journey Gunderson. "Our primary benchmark was to establish credibility within the comedy industry, which is national, and as a fortunate result of the quality of the programming and the attraction of the Guinness world record, we got the national spotlight that we hoped for."

She noted how media outlets from even worldwide markets arrived for the first few days of August, culminating in the world record for the most costumed Lucys gathered in one location. Recently, that number has been confirmed by the Guinness World Records as 916.

Meanwhile, Gunderson said a private firm from Buffalo has been hired to complete an assessment of the downtown impact as a result of the multi-day Lucy Fest. A survey has been put out to all festival participants and even as the center waits for concrete data, she said its reports of between 12,000 and 13,000 attendees has already put new ideas on the table for the next year.

"We just finished collecting the data and handing it over to them so that they can get back to us and report the economic impact that the festival had," she said. "We couldn't do what we intend to do in 2012 without having seen the numbers we put up in 2011 - the attendance of the festival exceeded our expectations."

Gunderson said the "Legacy of Laughter" vision at the center is set to be further unveiled in the summer of 2012.

"Pillar One was to re-establish the annual comedy festival in the way that Lucille Ball envisioned it herself," she said, "... that Jamestown would be a hub of humor and that annually we would celebrate the new voices of comedy."

The next Lucy Fest will be complemented by Pillar Two: the Comedic Arts education program.
"We are planning a comedy college in conjunction with JCC," she said, which will offer five days of classes for youth and adults. Slated headlining instructors are Bill Chott, a writer for the Dana Carvey Show and Saturday Night Live, and T. Faye Griffin, director of the nonprofit Kids in the Spotlight organization.

Gunderson said classes will be a "mix of the comedic arts," including basic fundamental joke construction, sitcom writing improvisational and stand-up comedy.
On the horizon are pillars three and four.

Another companion to the ongoing Lucy Fest would the Comedy Film Festival.
"Such a festival requires a lot of lead time: people need to make the films, enter them locally and have them be reviewed," said Gunderson, adding that such an event is not likely until 2013.

In possible years to come, all future programming would coordinate around a grander bricks-and-mortar home located in Jamestown. The final pillar in the Legacy of Laughter scheme is the National Comedy Museum and Hall of Fame.

An unveiling of a possibility was held last April, with Gunderson and others making the comparison to Cooperstown and its namesake sport.

''Like Cooperstown to baseball, Jamestown will induct and honor the comedic artists who most embody the legacy of Lucille Ball and Desi Arnaz for their impact on the world through the comedic arts,'' Gunderson said.

She said in the coming year one step toward the ultimate goal is a planned summit of the "minds and moguls of the comedy world ... people who are engrossed in that world and have made careers out of it." She added she is currently planning with boards members if this could take place during Lucy Fest 2012.

Business has flourished at the Lucille Ball-Desi Arnaz Center, and Gunderson said visitors can expect to find some newly added features.

"We are going to be reinvesting in the attraction," Gunderson said. "We have acquired some new items and received donations so some really unique memorabilia."

A new exhibit will document the annual Lucy festival since its inception. Interestingly, 2011 signified the 20th anniversary since the premiere, but Gunderson said this fact was absent from the already crowded marquee.

"One of our challenges has been to be of interest to people of Jamestown right here in the community - it is time for people in Jamestown to be proud of and recognize the amazing talent that has played here," she said. "There are not many towns of our size that can point to a track record and show alumni like us, and so would like to showcase that in the museum."

Gunderson said the exhibit makes a connection between the early performances of Louis Black, Ellen Degeneres and Paula Poundstone in the 1990s with the latest crop of up-and-coming performers to arrive in Jamestown, courtesy of the Rooftop Comedy Stand-up Showcase.

The agency has been signed up for another round in 2012, and Gunderson said their appreciation of the experience is well documented on the Lucy Fest Facebook page.

"They loved being in Jamestown and they were treated very well here," she said. "All of the comedians that came here, they reiterated to us that Lucille Ball was it: she was one of the icons that they looked up to, and for a few of them, the reason they went in to comedy. They said it was an honor to play Lucy Fest, and we were honored to have them here."

"Those growing relationships can only be a good thing," Gunderson added.
post at 7:00 AM No comments: