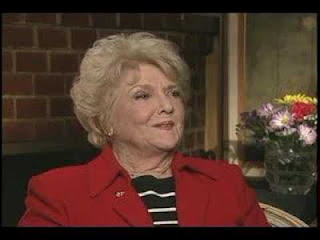 Actress and comedienne Doris Singleton Isaacs, who recurred on "I Love Lucy" as Lucy's near-sighted neighbor and sometimes nemesis Carolyn Appleby, died Tuesday, June 26, 2012. She was 92.

Singleton guested in a large number of both comedies and dramas during her 30-plus career in television.
After performing as a featured dancer with the American Ballet Theater in her teens, the Brooklyn-born Dorthea Singleton began in showbiz as a vocalist with Art Jarrett's orchestra in the late 1930s. Her distinctive voice led to a career in radio, where she was an actress on "The Whistler" and other shows during WWII, performing at times with the likes of George Burns & Gracie Allens, Bob Hope and Jack Benny.
Singleton met Lucille Ball in the late 1940s during a performance of the radio show "My Favorite Husband"; a few years later, Ball invited Singleton to join the cast of TV's "I Love Lucy" as Carolyn Appleby. Singleton appeared on 10 episodes of the show from 1953 to 1957.
By the mid-1950s the actress was busy with TV guest appearances on programs including "Adventures of Superman," "The Loretta Young Show," "The Great Gildersleeve," "The Bob Hope Show" and "Alfred Hitchcock Presents."
Singleton also appeared in a few feature films during the 1950s: "Terror at Midnight," "Affair in Reno" and "Voice in the Mirror."
She was a series regular on the brief 1960 series "Angel," recurred on "My Three Sons" as Margaret Williams and guested on "The Munsters," "The Dick Van Dyke Show" and "Gomer Pyle, U.S.M.C." during the decade; she also returned to work with Ball on episodes of "The Lucy Show" and "Here's Lucy" as well as the 1980 telepic "Lucy Moves to NBC," and she made appearances on dramas including "Gunsmoke," "Twilight Zone," "The Fugitive" and "The F.B.I."
Her credits during the 1970s included "All in the Family," "Marcus Welby, M.D.," "Phyllis" and the daytime soap "Days of Our Lives." Singleton made one of her last appearances in a 1982 episode of "Dynasty."
Singleton also appeared as an interviewee in the "American Masters" documentary "Finding Lucy" in 2000 and in an "E! True Hollywood Story" episode devoted to "I Love Lucy" in 2005.
Singleton's husband Charles Isaacs, a comedy writer, director and producer to whom she was married for 61 years, died in 2002.
post at 6:00 AM No comments:

Seminole Casino Coconut Creek is calling all Lucille Ball look-a-likes for a special contest celebrating the beloved actress and comedienne with $1,500 in cash and prizes up for grabs on Friday, June 15 at 8 p.m.
In honor of the 1950s theme of the month at Seminole Casino Coconut Creek, the contest will award first place for the most authentic and endearing Lucy with $1,000, while second place will earn $300 and third place will receive $200.
Participants will be judged based on the overall look and authenticity of the congenial character, and winners will be selected based on the decision of the judges. The competition is open to all those who hold a Seminole Player’s Club Card, which are available free to all visitors 21 and older. Participants must register in front of the Promotion Area at Seminole Casino Coconut Creek between 6:30 p.m. - 7:45 p.m. on June 15.
Ball was a lovable American star on stage, screen and radio. The charming actress, model, film and television executive played the lead role in the famous sitcoms I Love Lucy, The Lucy–Desi Comedy Hour, The Lucy Show, Here's Lucy and Life With Lucy. One of the most popular and influential celebrities during her lifetime, with one of Hollywood's longest careers, she began acting in the 1930s, becoming both a radio actress and movie star in the 1940s and then a television star during the 1950s.
June is a blast from the past at Seminole Casino Coconut Creek, with tons of great ways to win and enjoy entertainment 1950s style. Reliving the nostalgia of The Golden Age all month long, guests will enjoy performances by Little Anthony & The Imperials on June 16, All-Star Doo Wop Revival on June 23-24, plus Backseat Bingo, a chance to win a 1957 T-Bird, Hog Heaven Harley giveaway, $130,000 Hot Rod Road Race and much more.
Call 954-977-6700 or visit www.seminolecasinococonutcreek.com.

Bluewater Productions is pleased to announce a special comic book project featuring one of the most beloved and widely known figures in the history of American culture, the legendary Lucille Ball - Comics: Lucille Ball, written by Jaymes Reed and drawn by Patricio Carbajal.

Lucille Ball is arguably the most influential figure in the history of American television. This comic will focus on her humble beginnings and the incredible events that led to her eventually becoming a household name at a time when that meant virtually every American household as the star of the classic I Love Lucy program. Though she would pave the way for many female comediennes that came after her, she towers over the rest. There is still only one Lucy. This book shows the influences on her comedy that still influence every person who tries to make a living making others laugh.

"The series as a whole was created to help me laugh during terrible times following my mother's death on New Year's Eve 2009. When preparing the initial line-up for the COMICS series, I knew right away a Lucille Ball book would be near the top. Besides for being the Queen of Comedy, she was my mother's favorite television personality, nearly to the point of serious addiction. I grew up on corn flakes, Texas sunshine...and each episode of everything Lucy ever starred in! Comics: Lucille Ball will partly feature my mom as a little girl and will also be dedicated to her memory."

Publisher Darren G. Davis said, "Our goal is to show the little-known events and influences that resulted in Lucille Ball becoming the phenomenon she remains to this day, 100 years after her birth and years after her death. A visual medium provides perspective that is not only accessible but more relatable to the average person without losing any of the information involved".

This 32-page comic book will be chronicling this saga, Comics: Lucille Ball will explore all sides of this amazing talent, from her positive contribution to her fans' lives and society at large and how she is one of the few celebrities hardly anyone says a bad word about. Through it all, she always remained true to herself and appeared to be genuine. What you saw is what you got with her. There didn't appear to be a phony bone in her body. That - and her remarkable talent - is what has made her an enduring legend. Interest is still strong and steadfast for one of the most powerful women in the history of entertainment.
post at 6:00 AM No comments:

What Lucie Arnaz learned from her mom, Lucille Ball

From the Toronto.com by By Richard Ouzounian, Theatre Critic

“I learned so much from my mother,” says Arnaz on the phone from her home in New York. “Not just about show business and how to survive in it, but about what really matters in the way you live your life.”

The Ball centennial has suddenly brought out all kinds of long-hidden biographical material on the comedian, who died April 26, 1989, and Arnaz finds it fascinating.

“I just finished reading a bunch of letters from Marian van Black, her best girlfriend in Jamestown, N.Y. They were school chums and later modeling chums. She sent her over a hundred letters and Marian saved all of them.

“My mother was way more metaphysical than I ever thought she was. She kept saying, ‘I stop all day long to say I am so grateful for my life and my career.’ She seemed so happy in those letters. I didn’t see that woman. Too many years of the business.”

But don’t think Arnaz is one of these celebrity children who wallow in angst and point fingers at their parents for what went wrong.

Even though the Lucy-Desi marriage ended very publicly and painfully at the height of their fame, Arnaz won’t paint the past in shades of grey.

“It was a fabulous romance and a fabulous marriage that was destroyed by many things. The stress of success. My father’s wayward eye.” She laughs. “My father was Latin and had a lot of ladies on the side. They can be so charming these Latin men. Dad would come home and say, ‘Lucy, what’s the problem? They mean nothing. You know I love you the best.’

“And so my mother learned to live with it. That is, until it got into the papers too often.”

Another problem was her father’s drinking, but Arnaz says that only became an issue later on in the marriage.

“All Cubans drink and they can hold their liquor like crazy, until they suddenly cross a line when it’s too late to do anything about it.

“A lot of people thought my father drank because of trouble with my mother, or career pressures, but I think it was because of his own mother. He took very good care of her and she didn’t give anything back to him. It made him very unhappy.”

Arnaz appeared on one of Ball’s later TV series, Here’s Lucy, but during her summer hiatuses, took the advice of her mother’s former sidekick, Vivian Vance, and began a theatre career that she’s succeeded in all her life, most notably opposite Robert Klein in the original production of Neil Simon’s They’re Playing Our Song.

“You get your own career together and then you get your own life together and before you know it, you’re raising your own children. Was I as close to Lucy as I am to my own daughter? No. The times were different then. You’ve got to start early and get in the habit of opening up to each other. I have and I’m happy I did.”

But finally, why does Arnaz think the memory of her mother and I Love Lucy have such an enduring legacy?

“She left behind laughter. Why is a funny show something that people remember 60 years later and want to talk about? Because it was also about unconditional love.

“You can get into all the trouble you want but at the end of the day, someone is going to give you a hug and say, ‘That’s alright, I love you anyway.’”