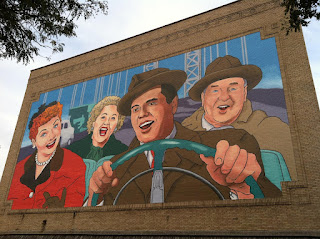 A new Lucille Ball mural on the Mayflower building in Jamestown has recently been completed. The mural, which is the largest Lucy-themed mural ever is also the first one done in full color and the first to show Fred Mertz. It is being funded by the Lucille Ball Desi Arnaz Center for Comedy.

This one-of-a-kind mural was painted by local artist Gary Peters, Jr. and is based on the classic episode "California, Here We Come". This "California Here We Come" mural is the largest mural ever painted in Jamestown NY. Peters, has painted four other "I Love Lucy" murals that grace the buildings of Jamestown, NY. Not only is this the largest mural yet, but it is also the very first to be done in color and the first with all four of the iconic I Love Lucy friends. Also, as an added treat there are three hidden messages in it.

On Monday, October 15th which coincided with the 61st anniversary of the first air date of I Love Lucy, the final red brush stroke of the remaining unpainted white heart on Lucy's coat button was completed. This small heart shape was left undone on purpose for this event. A group photo was taken with all in attendance at the corner of Main and Harrison Street. Community members and about 50 Lucille Ball Museum visitors gathered to be a part of this Jamestown history.

Over 500 man hours were put in by both Gary Peters Jr. and Gary Peters Sr. to paint the 1,800 square foot portrait over Brooklyn Square in downtown Jamestown. Almost 30 gallons of paint were required (some of which were donated by the local Sherwin Williams store) and there are various hidden 'I Love Lucy' messages in the mural, including the mural scene's episode number, 110.

Artist Gary Peters, Jr. appeared in the Tropicana Room the previous day where he talked about what it had been like painting all five of the famous Jamestown "Lucy" murals. He also was there to sign prints of all five murals, as well as his additional "Lucy" artwork, including the 100th birthday 2011 commemorative seal and downtown festival light post banners. The Tropicana Room is a re-creation of Ricky Ricardo's famous Manhattan night club located at 2 West Third Street in Jamestown, NY.

This was the fifth 'Lucy'-related mural completed by Gary Peters Sr. and Gary Peters Jr. in Ball's hometown of Jamestown, New York. The first 'Lucy' mural in Jamestown was completed 12 years ago, and this most recent mural is being completed on the heels of I Love Lucy being voted as Greatest TV Show and Greatest TV Comedy of all-time in the nationally-televised Barbara Walters' special, 'The Best in TV - The Greatest Shows of Our Time.' The previous 4 Murals that Peters completed in Jamestown are "The Lucy Stamp", on the Jamestown Post Office, "Vitameatavegamin" on a Parking Garage, "Candy Factory" on the Jones Tasty Baking building, and "Lucy/Desi" done in November 2007 and located at the corner of Spring and Fourth Street on the Spring Street Parking Garage.

Pictured below are the previous 4 Murals: 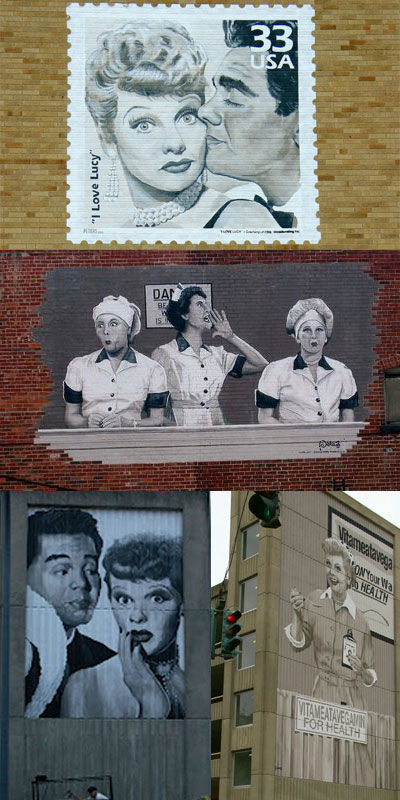 Now for the first time ever you can take home prints of all five I Love Lucy murals that decorate the hometown of Lucille Ball and are visited by over 30,000 people from around the world each year. These breath-taking prints are design by the mural artist himself, Gary Peters Jr. and if ordered by Saturday, October 20 Gary will sign your print of his artwork for you. Prints can be ordered online at Lucy-Desi.com or by calling them at 716-484-0800.