"The Lucy Show, The Official 6th And Final Season" DVD Coming in October 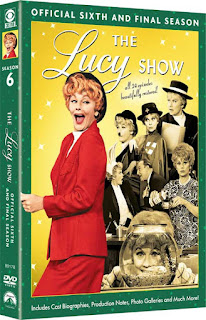 CBS DVD and Paramount Home Entertainment have now announced that The Lucy Show - The Official 6th And Final Season will be on DVD and in stores this coming October 9th. The 24-episode, 4 disc collection also has bonus material.

It's The Lucy Show's sixth and final hilarious season, as Lucy continues to go on wacky misadventures with her reluctant best friend and her cantankerous boss. Own the FINAL SEASON of The Lucy Show on DVD for the first time! The 4-disc set contains all 24 uproarious episodes from the sixth and final season. Guest stars include: Milton Berle, Ruth Berle, Jacques Bergerac, Frankie Avalon, Jack Benny, Robert Goulet and Buddy Hackett! All episodes have brilliantly restored color picture and audio. Also features Cast Biographies, Production Notes, Photo Galleries, and much more!

Stay tuned on how to order this Final Season of The Lucy Show!
post at 9:00 AM